Henry David Thoreau, in his treatise Civil Disobedience asked the question;  “Must the citizen ever for a moment, or in the least degree, resign his conscience to the legislator? Why has every man a conscience then? I think that we should be men first, and subjects afterward.”

What is civil disobedience? 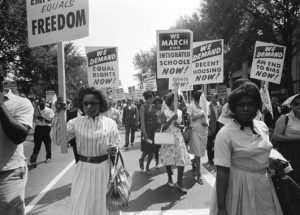 Civil disobedience is the active, non-violent refusal to accept the dictates of governments. It informs them that unjust actions will be opposed and the people will act illegally if pushed to do so.  Civil disobedience causes disruption and focuses attention, while forcing debate with the aim of bringing about fundamental and progressive changes within our societies and our world.

Government officials hate civil disobedience because it redirects attention away from the government’s agenda. We are brought up to believe that if we are unhappy with laws or policies that are destructive, corrupt, counterproductive, unconstitutional, or in other ways indefensible, we should just wait until the next election, wait in line dutifully, and cast our vote for change.

That is how a democracy is supposed to work.  This also assumes that there is a viable choice for change and as change happens slowly, the damage being caused can never be undone.  Thoreau wrote that voting for justice is not really acting for it.  Instead, we are "feebly" expressing our desire that the right prevail. He said that a wise person would not leave justice to the chance of a majority vote. The majority will end up voting their interest, voting for what will benefit them. A principled person must follow his/her conscience.  Government rarely proves itself useful and it derives its power from the majority because they are the strongest group, not because they hold the most legitimate viewpoint or are the most virtuous.

There are many examples of civil disobedience in modern history that brought about great changes.  Years later, these examples are celebrated and their instigators and participants are revered as heroes of consciousness:

Boston Tea Party - In 1773, the British parliament conferred upon the British East India Company a commercial monopoly on the tea trade. That and “taxation without representation” provoked the Sons of Liberty to stage the famous Boston Tea Party, an event organized by Samuel Adams and other American patriots. Under the cover of night, colonials boarded a British ship and tossed its cargo of tea into Boston’s harbor. Three years later, civil disobedience evolved into a Declaration of Independence and open warfare between Britain and its American colonies.

Rosa Parks’ Bus Boycott - In 1955, Rosa Parks acted alone and almost spontaneously in taking a quiet stand against segregated bus laws in Montgomery, Alabama. As Parks sat in the front row of the black section at the back of the bus, she was asked to give up her seat to a white man. Parks politely refused.  As a member of the National Association for the Advancement of Coloured People (NAACP), Parks knew there were plans to challenge bus laws and took this opportunity to make her own point. While Parks was arrested for her refusal to move, her action sparked bus boycotts that lasted over a year and resulted in a change to the bus segregation law in 1956.

Mohandas Gandhi’s Salt March – British laws forbid Indians from selling salt independently and required that Indians pay a premium for salt that wasn’t even from India. In March 1930, Gandhi and a couple dozen followers marched for 240 miles, sharing their thoughts on the unfairness of the salt tax with every town they passed. The salt march, or satyagraha, lasted months and gained such a huge following that 60,000 people ended up in jail for their participation by the year’s end.  In early 1931, Gandhi reached a truce with British leaders, called the Gandhi-Irwin Pact, which released all salt march prisoners and allowed Indians to make salt for domestic purposes.

The March for Jobs and Freedom - In 1963, Civil rights leaders helped lead the March for Jobs and Freedom. Also known as the March on Washington, the protest was in an effort to eliminate legal racial segregation in the U.S. About a quarter of a million people joined the rally for a peaceful demonstration.  The march was one factor that aided in the passing of the Civil Rights Act in 1964, which made it illegal to discriminate against black people for things like hiring, public transportation, and education.

Fight for Women's Suffrage - Considered the inferior sex, women had no vote, no power and no say in how their world is governed. In the face of injustice, women fought back.  Believing in civil disobedience, the NUWSS disrupted Parliament, chained themselves to railings, distributed pamphlets and organised demonstrations and lectures.  The 1918 Representation of the People Act granted women over the age of 30 the right to vote in Britain. Full suffrage, that is the right to vote over the age of 21, in accordance with male voting, was passed in 1928.

The Tree Sitters of Pureora: New Zealand 1978 - A group of friends and activists set up home in the branches of 1000 year old trees, while below them, bulldozers and chainsaws move to destroy the forest.  In the first ever tree-sitting protest, activists climbed into the canopy of six totara trees and demanded Pureora be spared. Platforms and tree houses were constructed as protestors occupied the area and refused to leave. Some blocked access to the trees with their bodies. This definitive, fast response was vital in that they established themselves before the authorities could respond.  This led to a government-imposed logging moratorium and, eventually, the end of native forest logging in the park, with the creation of Pureora Forest Park in 1978. The Treetop protest platform is still accessible today.

Protesting the Vietnam War - The marchers who converged on the Pentagon 50 years ago placed flowers in soldiers’ guns but also opened up a cultural fault line that persists to this day.  Protesters against the Vietnam war were confronted by military police (MPs) with rifles pointed directly at their heads. Among the demonstrators was a long-haired man with a bulky sweater – and a bunch of flowers.  “All of a sudden, this hero put a flower in the barrel of the rifle pointed at his head, and everyone was disarmed on both sides.  This was a turning point in the anti-war movement. More than 600 people – including novelist Norman Mailer – were arrested on 21 October 1967 for acts of civil disobedience, a day after a revolt against the draft led to the turning in of a thousand draft cards.  Half a million people would march in Washington in 1969. Four million high school and college students would go on strike in 1970 in response to the invasion of Cambodia.  Civil disobedience in protest of the war in Vietnam led to the end of the war and a dark time in US and word history.

It is our right, and our moral obligation, to protest over unjust political, economic or social conditions.